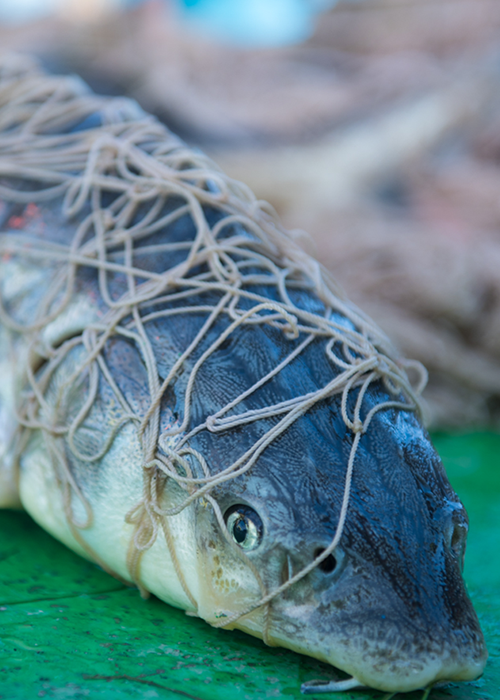 Hunting for ghost nets in the Caspian Sea

In October 2017, three Ghost Fishing Foundation volunteers and a team of Kazakh volunteers executed a ghost net removal pilot mission at the Caspian Sea. They operated 15 days from with working vessel MV Helen leaving from the port of Bautino, Kazakhstan.

All the volunteers at Ghost Fishing are technical divers. In other projects – including in the North Sea, Scapa Flow, Adriatic Sea, Mediterranean Sea – we jumped overboard with heavy diving equipment to remove old nets and fishing lines from shipwrecks and reefs. But around Bautino, the Caspian Sea is mostly only a couple of metres deep. We had to find a different way to get the job done. We also had to find a way for non-divers to work

In this phase of the project, we concentrate on the beaches of Kulaly island – part of the Tyuleniy Archipelago (the seal islands) – and on the Bautino strip, a small spit of land that runs from the harbour into the sea. The beaches look heavenly from the MV Helen. But as soon as you set foot on land – and especially on the Bautino strip – you enter a macabre animal graveyard.

There is death everywhere – dead cormorants, dead seagulls, dead seals and hundreds of thousands of sturgeon heads. We also see tens of thousands of PET bottles and other plastic litter. But we have come for fishing nets, and they are spread around in abundance, either washed up on the beach or discarded. Some lie partly in the water, others partly buried in sand. They may not be dangerous anymore for nature, but the next storm may push them off the sand and into the water.

It is heavy work getting the nets off the beach and out of the water. We sometimes need three people to pull a net, and it still may not move. And once in a while a distressing surprise awaits us: an unintentional catch in the nets of parts of seals that drowned after becoming entangled. In just one net we find three rotting cadavers. The smell stays in your nose for hours. However dirty and dreadful the task, the cleanup attracts more and more volunteers over time.

An ecological disaster is in the making. The Bautino strip is the appalling example of this. From a distance the strip seems to be a bit of untouched paradise. But just set foot on the strip and you become dejected. The volunteers cannot afford to become despondent. They drag one net after the other off the beach. At the end of the two weeks, minus a couple of days of stormy weather, there are eight overflowing big bags lined up on the side. Many more than we had anticipated in advance. The Bautino strip may now be free of nets, but the team is already planning the next clean-up expedition. There is still a lot of work to be done.