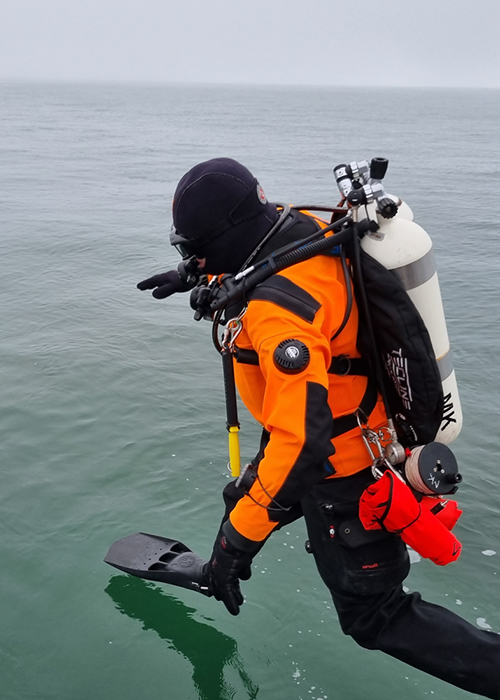 It is December 18, the meteorological winter has already started and the water temperature has dropped to about 8 degrees Celsius. Our last North Sea mission was on 9 October and since then we have been anxiously waiting for a beautiful day to set sail with MV MAKO. That day now seemed to have arrived and we decide to leave at the very last minute. What a relief to have your own boat, the flexibility and efficiency is truly priceless.

The purpose of this dive was to further investigate the origin of ghost gear in the Dutch North Sea, a research project we started in collaboration with Wageningen University & Research and Healthy Seas. On board we have our team member and resident marine biologist Erik Wurz, he is joined today by a new enthusiastic volunteer and colleague marine biologist, Renate. The rest of the divers are members of the Ghost Diving NL core team who will guide the dive and when we find it, they will pick up some ghost gear to investigate later. I myself am not diving today, I am the captain and responsible for the boat.

After the wreck of the Breydon Widgeon appeared on the depth sounder, the shot line was deployed and shortly thereafter the divers disembarked. Over the years we have learned that a small team of divers works most efficiently, so we operate with five divers including one photographer. The dive went according to plan, visibility is pretty good (typical for the winter months) and the wreck was quickly found. Some ghost gear is also recovered which is later examined on board and a report is made of the day. Everything went according to plan and you could see the enthusiastic faces on board. Winter diving is so cool, something that is often underrated.