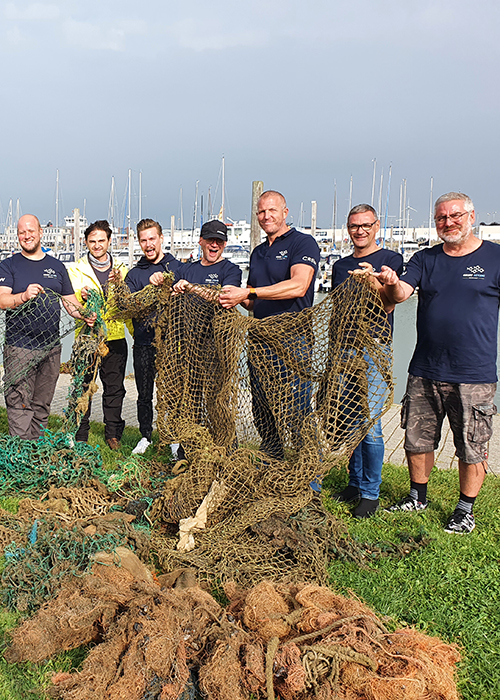 Surveys by wreck divers around the island of Norderney showed pollution from fishing activity is affecting the ecosystem of the German North Sea. Three of the many shipwrecks lying on the seabed in the area were revisited during 13-16 September and were cleared of 300 kgs of ghost fishing nets.

The Healthy Seas organisation has been collaborating with volunteers from Ghost Diving in several countries in Europe since 2013 to clear ghost fishing nets from reefs and wrecks. With the German chapter of the volunteer organisation recently established, it was time to expand these challenging sea cleanup operations to Germany.

“It is estimated that 640,000 tons of fishing gear are lost or abandoned annually in the world’s seas and oceans leading to the suffering and death of millions of marine animals. To help mitigate this pollution, during September 13-16, we descended to 20-25 meters to remove 300 kgs of fishing nets covering the wrecks of the MV Änne Ursula, the Vorpostenboot 812 and the SS Elsa near Norderney.”~ Kai Wallasch, Coordinator Ghost Diving Germany

Divers observed plentiful sea life including squid and shark eggs attached on the nets around the wrecks and were able to release several animals from them, such as star fish, North Sea crab, butterfish, velvet crab and common spider crab. The days were exciting on the surface as well, with multiple sightings of grey seals around the diving boat but also of a harbor porpoise.

“The enthusiasm and commitment of the team was fantastic! In spite of the challenging weather and high waves, we were able to dive for 3 consecutive days which is very uncommon for this part of the world.”~ Derk Remmers, Coordinator Ghost Diving Germany

The 3-day cleanup project was also made possible thanks to the Group Gezeitentaucher that identified and surveyed the wrecks in the past years and thanks to Hyundai Motor Europe that announced its partnership with Healthy Seas back in April. They are providing funding for the implementation of Healthy Seas cleanup and education activities. Actor and Hyundai Motor Germany’s brand ambassador Lenn Kudrjawizki, also joined the cleanup in Norderney to provide surface support to the team and help with animal releases. The next event in Germany will take place in October on the island of Sylt.

Healthy Seas is a best practice example for circular economy and will ensure that the recovered nets will become a new resource. The nylon parts will be regenerated by Aquafil, together with other nylon waste, into ECONYL® yarn, the basis for new sustainable products such as swimwear, activewear, socks and carpets.