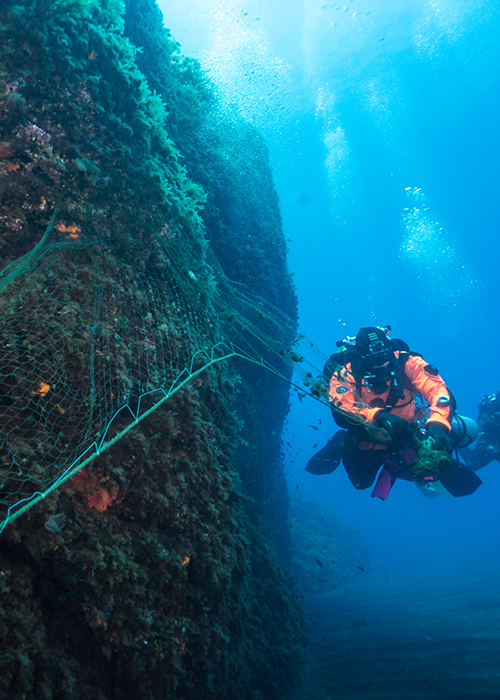 What an amazing diving trip we had near Salamina island, Greece last week! On 2-3 September together with Healthy Seas and and Ghost Fishing Greece divers, we removed huge amount of ghost nets from the “Aghios Markos” shipwreck and released a few entangled marine animals, thus made the seas a cleaner and safer place. Many thanks to everyone involved!

Up until the middle of the 1950s the Saronic Gulf, where Salamina island is located, was one of the most productive fisheries in Greece. It also served as a breeding ground for many species of fish. However, the extension of the built area of the Attica Basin and the industrialisation of the Thriasian plain put the surrounding waters under pressure and led to the degradation of the habitat.

The area had been seriously affected by these developments, suffering such effects as a sharp decrease in oxygen levels and extensive eutrophication – according to data collected by the Hellenic Centre for Marine Research. However, conditions improved after the Waste Treatment Centre in Psyttaleia became operational in 1994, and today it is not unusual to find sea turtles and dolphins in the area.

The presence of a wreck effectively means the creation of a new reef that soon becomes a magnet for marine life. Unfortunately, it also attracts ghost nets, the removal of which becomes imperative.

The wreck of steam freighter “AGHIOS MARKOS” (previously “HOMAYUN”) has been lying in the area known as “Kaki Vigla” to the northeast of the island (Interior Saronic), since the afternoon of the 21st April, 1941. The vessel is 376 feet in length, had a capacity of 6,850 tons and was built in 1919. It was Greek-owned, having been acquired in 1929 for the sum of £29,000. Captained by Spyros Kallimanis, it had left the port of Buenos Aires heading for Piraeus, laden with 5 tons of supplies from the Argentinian Red Cross. It had been awaiting permission to enter the harbour when it was repeatedly attacked by German warplanes and sunk.

Three fully manned boats took part in the mission, carrying 7 specialist divers who descended to the wreck that is lying at depths of between 35 and 45m. The mild weather conditions aided the smooth operation of the dive and a total of 500kg of ghost nets were removed. The fishing nets that were successfully brought to the surface had not only been acting as a death trap to the marine animals of the area, they had also been contributing to the degradation of the Saronic Gulf’s ecosystem, and taking remedial action was judged essential.

We are not only cleaning-up the seas from plastic waste and saving marine animals, but also raising public awareness about the problem of marine litter. Besides, the collected ghost nets will be recycled into ECONYL® yarn, a high-quality raw material used to create new products, such as bikinis, swimwear, socks or carpets. Thus, we are providing a showcase for circular economy and marine protection.

The diving trip was implemented in cooperation with MEDASSET, AquaTec Diver Training, The New Raw, Mind the Bump and Seahorsedive. Special thanks to our donor A. C. Laskaridis Charitable Foundation.

Check out the photos and the video below for some exciting insights!