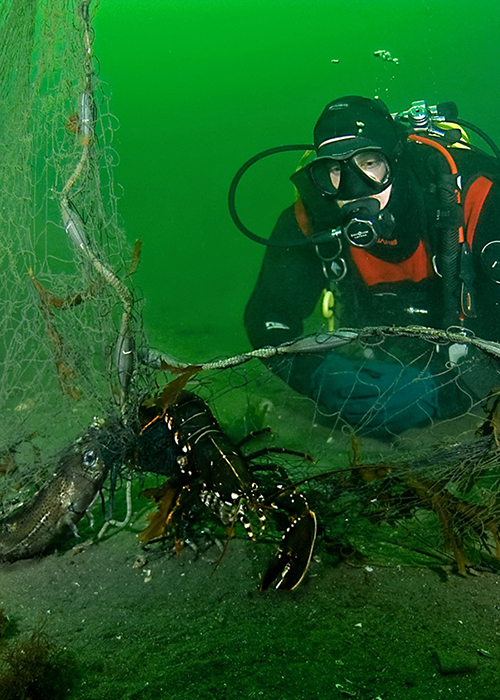 New report from WWF says abandoned fishing gear an “immortal menace” which must be central in the fight against plastic pollution.

So-called “ghost gear”, fishing equipment which is lost in the sea, can continue killing marine life for decades or even centuries after it first enters the ocean, making it the most deadly form of marine plastic debris. WWF is calling on governments to develop a legally binding global plastic pollution treaty that addresses this fundamental threat to marine wildlife.

Abandoned fishing gear is the deadliest form of plastic debris for marine life and has already driven the vaquita porpoise and other marine mammals to the brink of extinction, yet even as this crisis continues to intensify, little attention is being paid to it by governments or industry, according to a new report from WWF.

The report, Stop Ghost Gear: The most deadly form of marine plastic debris, shines a light on how ghost gear* is responsible for harming 66 per cent of marine mammal species, half of seabird species, and all species of sea turtles, often subjecting them to a slow, painful and inhumane death. It also damages vital marine habitats such as coral reefs and mangroves and threatens the food sources and livelihoods of coastal communities and fishers, according to the report, which highlights how tackling ghost gear should be at the fore of efforts to combat the global plastic pollution problem.

WWF plastic expert Vincent Kneefel: “Ghost fishing gear is like a deadly, invisible predator that has caused the gruesome deaths of rare marine animals such as the California harbor porpoise (vaquita) for decades, hanging in nets. The damage to habitats for other species such as coral is also enormous. We do not point the finger at fishermen, because no fisherman wants to lose his fishing gear. It is their livelihood, but even in the best managed fisheries in the world, fishing gear is left behind or lost due to weather, mechanical problems or human error. But it is a major problem that must be tackled quickly.

”Ghost fishing gear in the North Sea According to Pascal van Erp, initiator of Ghost Diving, a Dutch organization that specializes in cleaning up abandoned fishing gear, it is also a major problem close to home: “Every time we do a wreck dive in the North Sea, it hits the spot. You now mainly see remnants of fishing gear from standing rig fishing, but also lines and lead from anglers. It all hooks together like a ball of wool and you can imagine that many sea creatures die a gruesome death as a result. ” Next year Ghost Diving will conduct research together with Wageningen Marine Research into the origin of "ghost fishing gear".

WWF is calling on governments to support the establishment of a new treaty to stop plastic pollution and is also encouraging countries to join the Global Ghost Gear Initiative - a global alliance of fishing industry, private sector, corporates, NGOs, academia, and governments focused on solving the problem of lost and abandoned fishing gear worldwide.