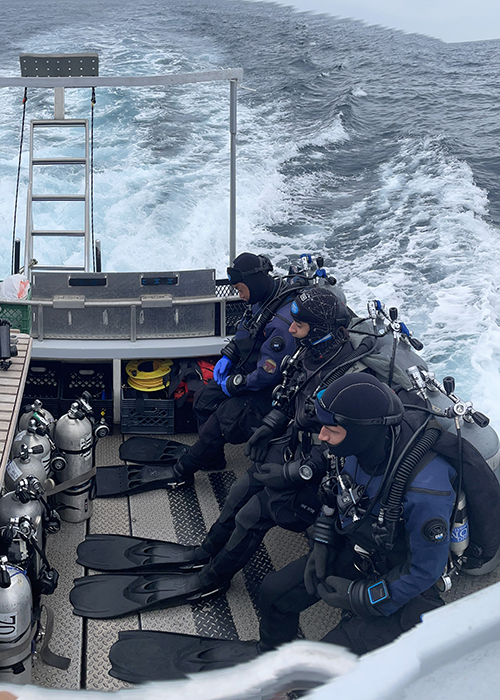 On October 10th, 2022 the Ghost Diving USA team set out to survey two target sites. The objective of these surveys is to collect data and images that will help the teams evaluate the impact the net is having on the environment around it, the potential risks of removing the net and ultimately the logistics of the removing the net.

The first target was Farnsworth Bank, a state marine conservation area (SMCA) on the windward side of Catalina Island. As an SMCA, some recreational and commercial take is allowed with varying restrictions (California Department of Fish and Wildlife, 2019). Farnsworth Bank offers some of the most beautiful and unique diving that Catalina has to offer. The dive site is a series of pinnacles that range from approximately 60 – 150 feet in depth. Recreational and technical divers alike flock to Farnsworth Bank to experience the wide variety of unique marine flora and fauna.

Aboard the Giant Stride, ghost divers set out to survey Farnsworth Bank for a 200-foot net that was reported by Karim Hamza and Jim Babor after they found the net and a drowned cormorant in the net. The team consisted of an open circuit team (Norbert Lee, Rene Tetter, and Curtis Wolfslau) and a closed-circuit team (Jim Babor, Karim Hamza, and Tianyi Lu).

The teams descended on the middle pinnacle, called middle 68, to 143 feet and located the net. Upon arriving, the teams collected GPS data, survey notes and video of the net. The teams also found lobster traps and small pieces of net on top of a pinnacle at 90 feet. After a successful survey dive, the team moved to their next target: The Midnight Hour.

The Midnight Hour is a commercial purse seiner that sank off the west end of Catalina on August 30, 2011. She is 61 feet long and resting on her starboard side in approximately 100 feet water. The crew was rescued with no injuries or fatalities, but the cause of her sinking is unknown. The Ghost Diving team descended upon the wreck and found that the drum, which holds the majority of the net, has now separated from the wreck. The team collected data as well as video of the wreck and the drum. They feel that they, with appropriate planning, can successfully clean up the net. One of the most significant logistical factors will be conditions at the site of the wreck. It is well known that the site has strong currents and rough surface conditions, and the team will have to plan conservatively.

With the photos, video, survey notes and GPS data collected, the team will now examine the severity of the threat these nets pose. Next, the logistical needs of the project will be examined. These logistics include building teams with appropriately trained personnel, creating a detailed dive plan and ultimately creating a detailed plan of how the personnel will safely and effectively remove the nets. Ghost Diving USA looks forward to returning to these sites to remove these nets.

California Department of Fish and Wildlife (2020). Catalina island [Map, below].