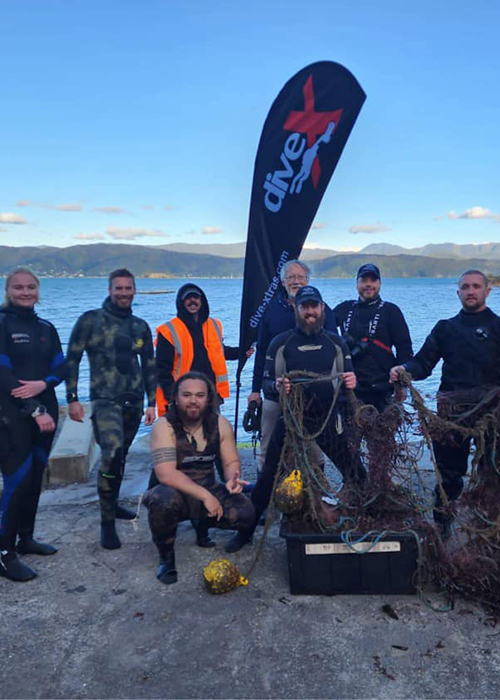 We had just finished out last public clean-up of the year, people had given up there Saturday to help clean up the harbour. To find out that we had another mission. One of the locals had found ~40m net discarded, unlabeled (which is illegal) and still catching animals. We sent out the call and within 10 hours we had a crew and formulated a plan.

Wednesday 3pm, outgoing tide, sun is out and a northerly is blowing, looks to be a good dive. After a quick dive brief by Rob Wilson of the game plan. It was time to suit up and fire up the Black Tips. The dive team of Rob, Stu, Calvin and Erin started to search the location for the net. As the bay was open to the northerly, it had become murky.

Top side Eddie and Andrew waited patiently as they scanned the sea. They are used to this, as being divers themselves they know what the vis is like. But they know the skills of the team, they knew they would not be waiting in vain........ then.... 1 lift bag breaks the surface, followed by another, and another, and another, till 10 lift bags are up.

Here the Free dive team of Chris and Gabriel show why they are such an integral part of the operation. They grab one side each and start to swim the net back to shore. Eddie wades out in his wet suit to meet them and attach a rope to it, that is attached to the Ghoost Ute. Shore team and Free team work together to haul it ashore, as the dive team comes back after doing a deco stop.

Another successful mission, but the damage had already been done. As we found heaps of bones in the net and lots of snails. Telling us that several species had been caught and killed. But no more will be taken.