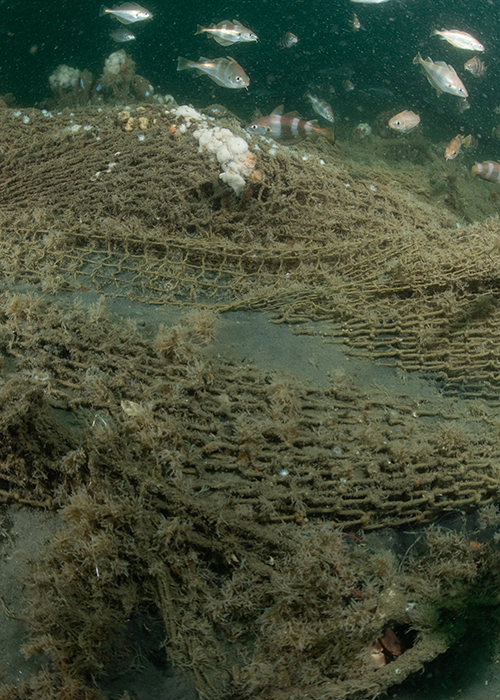 For the past decade, our North Sea teams we have mainly focused on cleaning up a shipwreck that had been nicknamed "Rode Poon". This name, referring to a species of fish, was given to it by fishermen as the wreck was still unidentified after all these years. The wreck has been heavily polluted over the years with numerous types of lost fishing nets and fishing lines and the Ghost Diving volunteer diving team has worked hard for years to remove this pollution. During one of the clean-up missions in 2018, we  found an identification plate of one of the boilers and after intensive research we managed to identify the wreck in 2019 as S.S. Trevier. This shipwreck appeared to have been resting at this location since 1917 and was sunk after an attack by the German submarine UB-23. The identification, together with the clean-up efforts that have brought the wreck into a much better condition, have given us satisfaction and therefore we have decided to consider this wreck as “cleaned”. It is therefore time for a new goal.

The word "Vaderdag" in Dutch means "Fathers day" and it is just like in the case of the Red Poon, a nickname because the real name is still unknown. The stories go that the wreck in question was discovered on, you guessed it, Father's Day. Besides still not being identified, this wreck has a second resemblance to the S.S. trevier, as it is also heavily polluted with lost fishing gear and so we have decided to consider this wreck as our next North Sea target. In the coming years we will again work hard to make this wreck cleaner and who knows, we may also be able to give this wreck back its original name. The first three weekends are already behind us and we are already well on track. We will keep you informed!