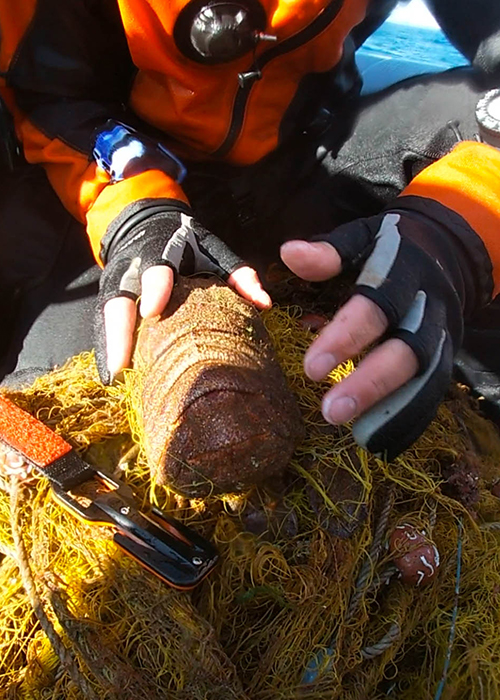 Thirty-eight animals released in just one hour in Greece

On July 30th, the Ghost Diving Greece team undertook a ghost gear retrieval at Arsida Island, Anavyssos Bay. We set off at 7.30, heading to the site where a net which (we believe) had been previously located & partially removed by Athens Divers. At its deepest point, the net sat at 43 m, draped from the island wall down to the seafloor.

This was a nylon polyester gillnet that had been lost by fishers & became entangled at the base of the island. Gillnets are designed to hang in the water, with weights on the bottom and small floats on the top, suspending it in the water column. Due to the tangling of the net as it drifted, the net was not fully extended and therefore posed less of a threat to fish as it did to invertebrates- lobsters, crabs, snails and other animals that move by walking along the seafloor. This barrier to movement of benthic sea creatures resulted in the entangled of 3 large slipper lobsters (Scyllarus pygmaeus), seven crabs, more than thirty Whelks (Hexaplus trunculus) and numerous sponges that had become ensnared in the line.

After the net was retrieved, the team carefully spent over an hour sorting through it in order to remove these animals safely. The ethos of Ghost Diving is primarily to protect the marine environment via the removal of lost and discarded fishing gear. This dive was therefore significant in that this involved the removal of active fishing gear that was still capturing marine wildlife. When gear is left in the ocean, animals will accumulate and eventually die, attracting others when they decompose. By removing this gear we are breaking this cycle & preventing further loss of marine wildlife.