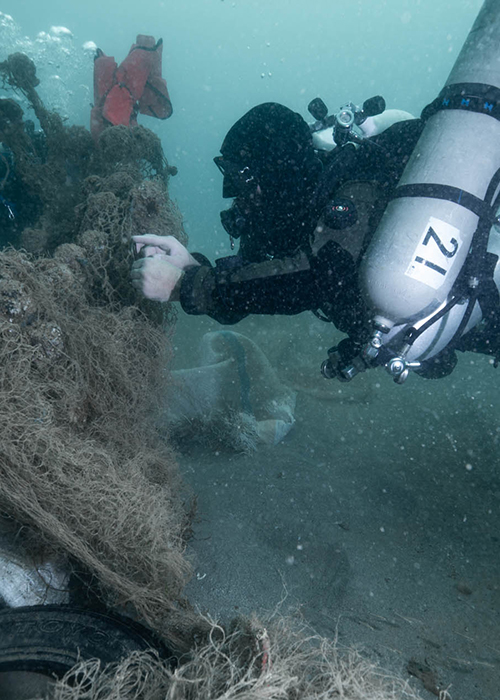 The operations in Cyprus and Lebanon are in full swing
When 2021 concluded on a good note, with multiple projects successfully executed throughout the year, Ghost Diving East Med kicked off 2022 with 2 projects, one executed in the crystal clear waters of the Mediterranean Island Cyprus, and the second project on the Lebanese shoreline.

In the early months of the year, a group of GUE divers gathered to lift another piece of discarded fishing net laying in one of the most visited dive sites in the east side of the island, Protaras.

A couple of scouting dives down, and the team met, discussed, planned and choreographed the mission to its finest details.

Safety being its top priority, the team customized the plan to take into consideration a pack of parameters coming into play such as possible entanglement and successful lift procedure.

Talking about the net itself; the fishing community on the island has been using these pieces of trawling nets to create calamari traps for ages, weighting them down to the seabed using cement blocks and morphing them into upright standing walls, posing potential risks to marine animals / mammals and divers alike.

Ghost Diving has always been a hub for like minded people to collaborate, where on this project, a guest member from Ghost Diving UK participated and lent a helping hand on the mission.

A month later, the team diving in Lebanon scouted and located another 200 meters gillnet encrusted with a mess of tires and ropes.

The group of divers headed out again, and jumped in to retrieve the Net.

With monofilament nets, the challenges are always around the corner with entanglements and extra complications, adding to that, bad visibility played its role to serve the divers with an extra layer of complexity.

But the guys kept a goal fixated perspective, attached the lift bags to the strategical places on the net and send it to the surface, where the collection team took charge and retrieved it.

With these projects, our East Mediterranean sea is becoming a cleaner and better environment where marine species will have a better chance of survival.

We always have a saying that goes like “Maybe we are not where we want to be, but today we are at a better place than we were yesterday”