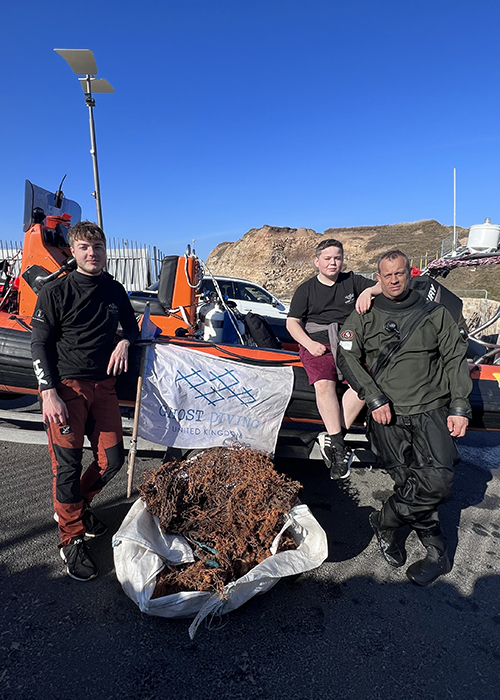 Over the past few weeks we have conducted some surveys in the British North Sea. Soon we will start recovering the ghost gear that we have located.

March 26th, our UK team travelled to a previously surveyed mark about 3 miles off the Northeast coast of England. With some beautiful conditions the team descended to a 30-metre wreck and used a pre-laid line to navigate to a large ghost net.

The first dive team prepared the net by placing lift bags in strategic locations to ensure a safe and efficient lift. The second team proceeded to fill the bags and cut away any snags. After about an hour of work, the ghost net was successfully brought to the surface, with a team waiting on the RHIB to recover it and remove any trapped marine life.

April 2-3, a trip to lift ghost gear from Southeast Scotland was cancelled at the last minute due to poor weather. Being technical divers at heart, we decided to use the opportunity to survey some deep marks with reported ghost nets on the west coast of Scotland in the Sound of Mull.

The West Coast of Scotland has an array of sheltered sea lochs with prominent shipwrecks off the coast of Oban sunk during the second world war.

We headed North on Saturday afternoon arriving in Lochaline late on Saturday night. Early Sunday morning we procured some spare spaces on a charter boat and headed out into the Sound of Mull.

With a maximum depth of 60 meters, the technical team found multiple actively ghost fishing lobster pots which were promptly disarmed. After a successful weekend, with more possible marks identified, we travelled to the East Coast for a meeting with a local harbour authority about future ghost net recoveries.