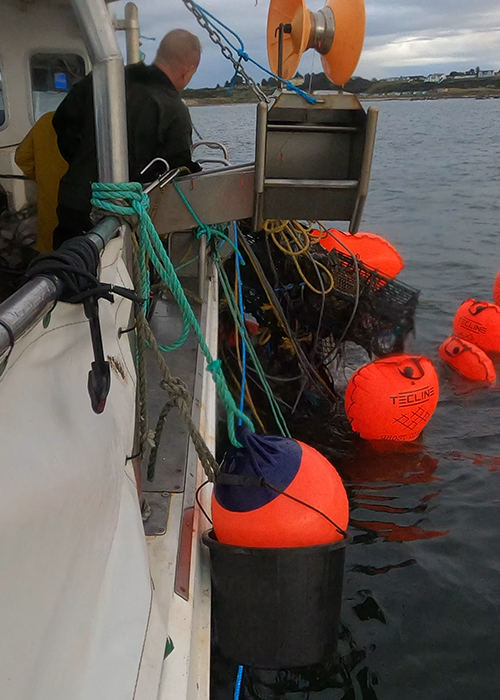 We were in Burgh head on the North East coast of Scotland helping a local fisherman recover over 500 lobster pots lost during storm Arwen. Whilst we were there, we received a call from Derek Anderson, the skipper of an Eyemouth dive charter. Derek had been approached by a St Abbs fisherman, who enquired if he could contact Ghost Diving UK to assist him recover over 20 lobster pots that were snagged off St Abbs head on the wreck of SS Glanmire. Derek also mentioned divers from his Aquamarine charters had been reporting a dangerous number of ropes from lobster lines which were creating an entanglement hazard on this popular North Sea shipwreck. He realizes it's all a bit short, but hopes we can help.

Of course we help, that's why we're here.

It was 18th December the weather being typically temperamental in the North Sea, the SS Glanmire needs neap tides due to strong currents in that area, we would be lucky to get out before Christmas Day which was the following weekend.

We requested volunteers from the new UK Ghost Gear Coalition to assist and created a team including Steve Sanders from Sea Shepherd Ghost net Campaign. A few days before Christmas we received word from Derek that the weather and tides were good enough.

We set off to investigate, soon realizing on site that the shot line had become separated from the wreck. We used one of the lobster lines to trace our way to the wreck, after what felt like a lengthy swim, we arrived on the wreck to find lobster lines crisscrossed all over. The rope was difficult to deal with due to the low visibility. We cut off as much we could, secured it inside lobster pots before attaching lift bags and sending them to the surface.

We followed the same work pattern around as much of the wreck as we could for 40 minutes, before having to leave as the current started to pick up and our bottom time ran out. Back on the surface we were discussing our plan to return to complete the job when Derek received a request via radio from another fisherman who had snagged a line of pots on what he thought was an old anchor North of Fast Castle.

We headed north and prepared what gas we had remaining for a second dive. Meeting up with the fisherman we planned another 27m ghost gear recovery, Steve heading in first, we followed him down and all worked together attaching lift bags and cutting pots free, it was challenging work as the pots were all twisted and tangled into the rope line.

Eventually in the final minutes of the dive we managed to lift all of the ghost gear and headed to the surface. We then began to help with getting the tangled mess of pots and rope out of the water. Much to his relief we managed to return all the fisherman’s gear and in the fading light we headed back to Eyemouth after what was a challenging but rewarding day of Ghost Diving.

Unfortunately, as a result of Storm Arwen, there remains a large amount of ghost gear on the SS Glanmire wreck and around the North East coast. In the coming new year there will be plenty of opportunity to plan and remove the remaining ghost gear left by the storm. We look forward to helping when and where we can.