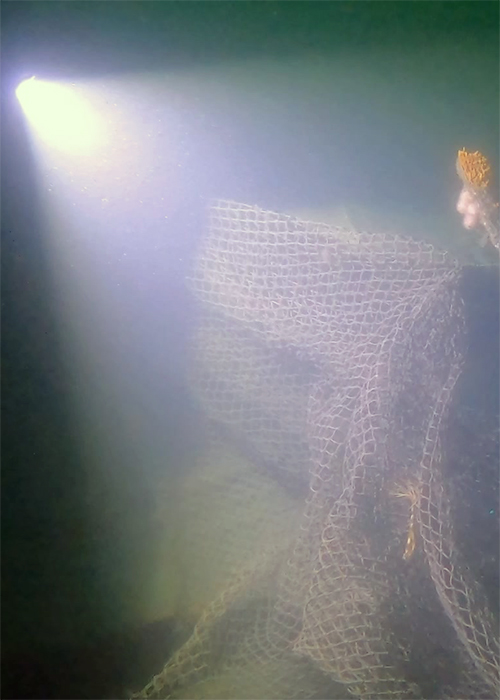 On the 11th July 2021 the Ghost Diving UK north team were heading out to survey a local wreck known as the “dirty wreck” i.e. the firelight, which is renowned by local fisherman for having a lot of recreational fishing gear snagged on it. Unfortunately, local fisherman were over the wreck so we changed our plan to a survey the S.S. Mars, this turned out well as we located a large trawler net snagged on wreckage North of boilers, we immediately started to plan the lift.

On the first day of the sponsored event with Hyundai and Healthy Seas the selected team carried out their first official survey on the net which was to be prepped and lifted over the following days. The net lifting team consisted of Daniel McMullen, Duncan Simpson, Thomas Aucott and Rachael Priest. We also selected a second team to be available for any tidying up if required and this consisted of Chris Preston, Nigel Aucott & Stephen Smith. On the first dive Duncan tied the shot line in and installed guidelines to maximize dive time by making it easier to locate target areas. We then went on to locate a bunch of lobster pots heavily snagged amongst a bunch of wreckage on the east side of the boilers. During the second survey dive we took notes and sketches of the net to reflect on the task in hand. Chris Preston then went ahead and secured 3 lift bags which were to be stored under the wreckage over night in preparation for the lift on the 15/08/21. For added security Thomas & Nigel Aucott tied in wasters to make sure the net did not move overnight.

On the Sunday the lift was planned and led by Daniel McMullen. We planned to unravel the bags which were stored under the wreck overnight and inflate to get them suspended in the water. We then went onto inflating the furthest away lift bag on the northern side of the net. The team agreed this was going to be the easiest part of the net to get unsnagged from the wreckage and by doing so this would get the net vertical in the water column and reduce the surface area of the net where the team were working. Once the first bit of net was free from the wreckage the team moved south along the net inflating the lift bags they come to and once there was sufficient lift in each of the bags Duncan Simpson gave the signal to cut the temporary wasters holding the net in place. Daniel & Duncan were then faced with the largest part of the net which was snagged around a large steel plate, they attached another lift bag to put extra tension on the net then carefully cut away at the remaining sections of net that were wrapped around the steel plate.