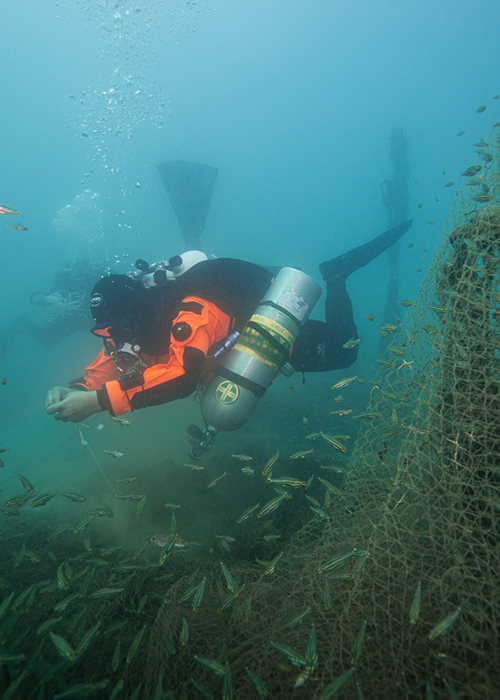 Once again, it was time to hit the water, another duty call, another location, another epic mission in the warm Mediterranean waters of the Lebanese coastline.

After rigorous scouting, the ghost diving Lebanon team in collaboration with the marine conscious minds at North Coast Divers, have successfully located a humongous abandoned fishing net, one that was setup to be used as a channeling trap serving to catch schools of fish such as skipjacks, barracudas, little tunnies, and lots of other species that roam the area.

With lots of sorrow, the first scouting dive, revealed the sad truth of finding the inevitable and the main reason to why we do this job!

A juvenile GREEN TURTLE, had been entangled in the net, where it unfortunately could not make it back to the surface, leading to its suffocation and death.

Thankfully not all those encounters where as dramatic, where the team managed to locate other entangled specimens such as a red mullet, some crabs, shrimps, and released them back into the water. The team regathered, and drew a plan to retrieve the left behind net. Joined by the dear friend Jenny Lord, a member of the Scuba Seekers family in Dahab and Ghost Diving Egypt, armed with our trusted lift bags and ropes, we went out to just shoot that GHOST NET to the surface.

Visibility wasn’t that great, but that we are accustomed to, since the conditions are most of the times rendered to mediocre once we start our job of maneuvering the net. 40 minutes into the dive, we had already scanned, assessed, attached the lift bags to their designated locations and initiated the lifting process.

But, the 400ish Kgs humongous net insisted not to leave the bottom ! After lots of hard work, trying to cut off the net connection points to the bottom, and after bursting 2 of the liftbags due to its huge weight, the team managed to send the net upwards to the surface, and ascended for collection.

Lifting that GHOST NET onto the boat was not the easiest job, neither moving it from the boat onto land, therefore the only option caused by the challenging weight of the NET, pushed us to cut it into smaller pieces, making it easier for transport.

At the end of the day, although a dramatic event such as finding a majestic GREEN TURTLE dead in a GHOST NET will never be an easy sight to us, but knowing that our seas are now with one less threat to marine animals, is a huge relieve and a source of joy.

A huge thanks to the team, David Ferris, Elie el Khoury, Christian Khater, and our beloved Dahabian visitor Jenny Lord for the efforts done on that day and for the continuous support in our missions.