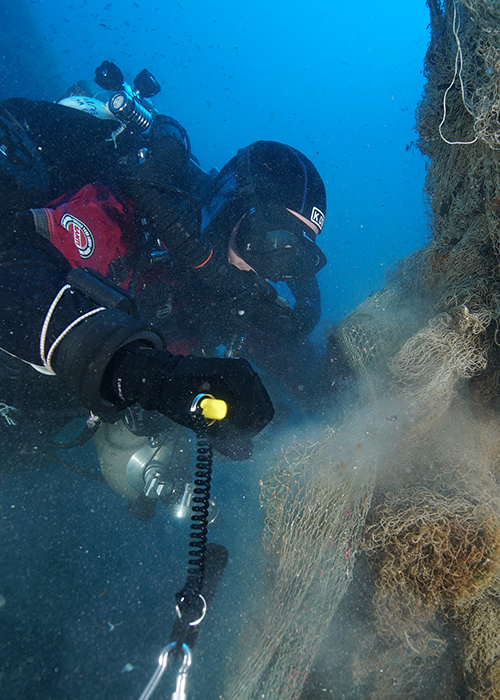 Teaming up with legendary explorer Mario Arena in Italy

We teamed up with legendary underwater explorer Mario Arena who has been scouring the international and high seas for archeological artifacts since 1994.

During June 27 – July 22, Mario and a team of 14 volunteer divers from The Society for the Documentation of Submerged Sites (SDSS) explored the marine area around Lampedusa, to identify and document, in order to ultimately protect, various wrecks sunk during WWII Battle of the Convoys (1941-1943). DAN Europe Vice President, Laura Marroni, was also part of the team.

Shipwrecks provide excellent habitats for marine life, acting as a reef and providing shelter. At the same time, it is on wrecks that fishing nets get most often snagged. It is estimated that 640,000 tons of fishing gear are lost or abandoned annually in the world’s seas and oceans leading to the suffering and death of millions of marine animals. To help mitigate this pollution, the team also removed fishing nets covering 2 sunken structures during the 4-week expedition with the support of Healthy Seas and Ghost Diving.

Descending to 76 meters, about 20 miles off the shore of Lampedusa, the divers spotted a huge trawl net that was recently lost on the postal steamer Egadi. It was so massive that they were able to retrieve half of it. The second net was 40 miles away from shore, on the wreck of the Narval, a French submarine that sank 3 months after it launched during WWII, taking 50 boys to their grave. The team placed a memorial plaque to commemorate the crew.

The divers were able to set free a very big crayfish from one of the nets that was fighting and kicking. They also encountered many fishbones entangled in the nets and even a Caretta caretta carcass.

“Removing nets has been on my agenda for many years, mainly because they cover important characteristics of the shipwrecks. Through our collaboration with Healthy Seas, we were able to turn our passion for historical wrecks into a positive environmental solution,” says Mario Arena. “We are also thankful to Ghost Diving for sharing their knowledge and procedures on ghost net removals,” he added.

Healthy Seas will ensure that the recovered nets will become a new resource. The nylon parts will be regenerated by Aquafil, together with other nylon waste, into ECONYL® yarn, the basis for new sustainable products such as swimwear, activewear, socks and carpets.

The project was carried out also with the support of Hyundai Motor Europe that announced its partnership with Healthy Seas back in April. They will be providing funding in order for complex clean-up activities to come to fruition.