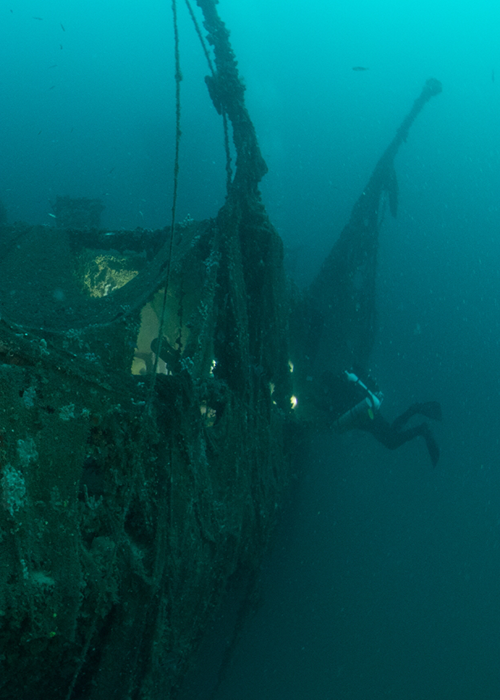 We decided to return to Croatia with the Healthy Seas initiative 5 years since we were there last. In 2013 and 2014, with support of Krnica Dive Center, Ghost Diving volunteers cleaned the Argo wreck from top to bottom (bow to stern) and lifted over 3,500 kilos of trawler nets to the surface. Our motivation, besides adherence to our mission to clean the seas, was also to see that the Argo- one of the most impressive shipwrecks in Kvarner Bay- became again an immaculate diving experience for its visitors.

Other shipwrecks lie in Kvarner Bay. So, in September 2019, our diving team targeted the MTB-566, SS Vis and SS Lina as well as nearby reefs heavily polluted by ghost nets and other lost fishing gear. Three Ghost Fishing chapters (Netherlands, Greece and our youngest brother Poland) were involved in the operation and brought together 12 volunteers from the Netherlands, Poland, Germany, Italy, Greece, and Croatia. The project was our longest until now, lasting 9 days!

As they say, there is a first time for everything, and this mission gave us some 1st time experiences. Like when Pascal rescued a stingray! They are venomous and complicated to release because there is always the risk of being stabbed by their tail. This animal was in heavy stress and already had some serious traumas after fighting against the gill net. It is important to note however that a stingray only attacks in self-defense.

A barrel jellyfish was also found entangled in the nets. The large creature (it can weigh up to 35kg) is venomous through its tentacles but with some careful handling we were able to set it free!

During our 'mission special' dive at the MTB-655, we found an active WWII sea mine in a trawler net. We frequently dive in war wrecks so this sighting may not be so unique for us but still, it’s an active mine…so we didn’t touch it.

At the end of the mission everyone was satisfied with what we had accomplished. Over 1000 meters of gill nets were removed and will no longer pose a threat to the biodiversity of Kvarner Bay. The next time we return we hope to see the bay as we left it and even cleaner as a result of local efforts which are in progress. As for the Argo, no new nets have been caught on it since 2014 so we swam through it as visitors. It is indeed an immaculate diving experience!